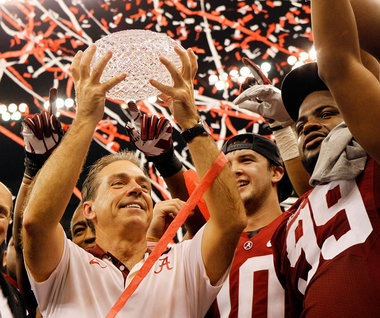 Well, the Alabama Crimson Tide beat LSU in the BCS Championship game. It was not my desired outcome, but the good news is that an SEC team won the National Championship proving it’s dominance once again in College football. That makes 6 National Championships in a row for the SEC. Alabama played a stout defense shutting out the LSU Tigers.

The crowd was wild and crazy. The energy was high, typical of any College Football Championship game. There were thousands of Pom Poms waving in the crowd as well as many other spirit items, the majority of them were Crimson and Red. I have a hard time uttering the words, “Congratulations Alabama,” however, I have no problem whatsoever saying, “GO SEC!!” Will next year be another win for the SEC? I hope so.

Now there will be lots of spirit items such as mini footballs in Crimson and Red floating around and Championship T-Shirts that we will see Alabama fans wearing for years come.

Sorry, the comment form is closed at this time.